This post by Caro Verbeek originally appeared on the Futurist Scents blog. 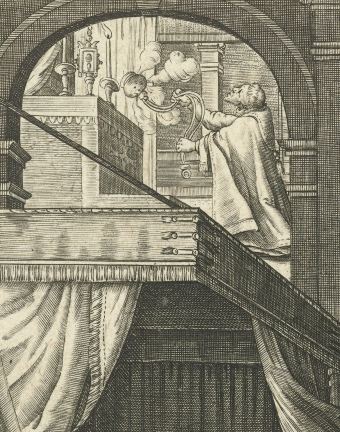 This post by Caro Verbeek originally appeared on the Futurist Scents blog.

The Rijksmuseum houses many luxurious and lavishly decorated pieces of furniture. But the most mysterious specimen must be this 18th century ‘collector’s cabinet‘. It houses a miniature apothecary’s shop, and  dozens of hidden drawers. And surprisingly: the contents aren’t just intact, some still give of smell. The cabinet was possibly meant as a tool to enhance sensory skills in order to recognise plants, seeds, roots, gums and resins by their colour, shape, texture, and scent.

Smell and medicine have been closely intertwined for centuries. Before Pasteur’s discovery that some illnesses are caused by microscopic organisms, people generally believed that stench was responsible for outbreaks of diseases like the Plague. This widespread conviction was known as ‘miasma-theory’. 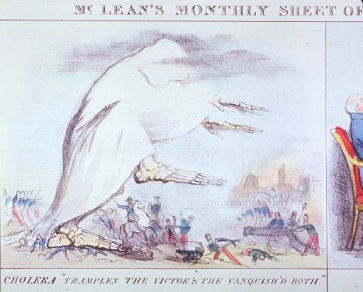 Not only were miasmas considered harmful, many strong smelling and fragrant plants were thought to have beneficial effects (also see my post on the fragrant treatments of William of Orange and his wife).

As a consequence, doctors and pharmacists were able to recognise both diseases and medicine by sniffing, so with a ‘diagnostic nose’.

Conservation specialist Henk van Keulen (Cultural Heritage Agency, Netherlands) tried to determine the contents of the most fragrant drawer (which contains gums and resins) by means of gas chromatography (GC), but since chemists that work on art, aren’t trained to read gas chromatograms for fragrant substances, the results needed validation. And what better way to do that than by using our own ‘natural equipment’? 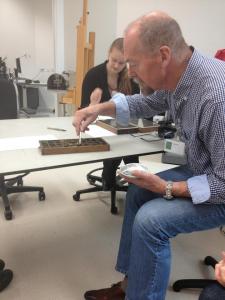 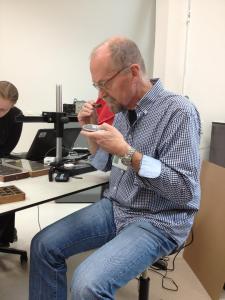 Gaby Joustra, Caro Verbeek and Mirjam Schipper during a historical sniffing session at the Rijksmuseum (2012).

Because (trained) human noses can be just as – or sometimes even more – precise than machines, I suggested to Paul van Duin (head of furniture conservation at the Rijksmuseum) to invite several perfumers to sniff out the apothecary cabinet and compare results. What followed was a 4 hour intensive sniffing session full of wondrous conversations and scents.

One of the secret drawers filled with gums and resins.

Most resins and gums stored in the cabinet (benzoe, labdanum, galbanum, myrrh and frankincense) are still used in perfumery. Perfume history is actually rooted in medical history, so most of the time, the noses had no problems determining what they were dealing with. In many cases the outcomes were identical. When the GC indicated ‘myrrh’, all three perfumers confirmed this finding. One of the perfumers:

“It smells like laurel and liquorice, so indeed it’s myrrh”

In other instances the human nose and the GC pointed in different directions. Whereas the machine (or rather the professional reading the gas chromatogram) wasn’t able to provide any answers in a particular case the perfumers did have ideas, but there wasn’t consensus:

Perfumer 1: “It smells like styrax with a mineral earthy undertone. With a ‘little’ pepper indicating elemi”. Perfumer 2: “But it is also dry and sweet”.

In a third type of case, machine and nose contradicted each other. One of the substances for example, was unanimously diagnosed as myrrh by the perfumers, while the GC indicated ‘elemi’. One of the perfumers:

“Elemi has more of a peppery, nutmeglike note. The sweetness makes it similar to ambery myrrh”

It was intriguing to compare the dramatically different methodologies. Paul van Duin:

“It was amazing to compare the outcomes of two completely different approaches and to be able to validate results. I am very thankful to you [author] and the perfumers”

“Afterwards we talked a lot about the experience. It was a beautiful occasion to expand my knowledge of smell, but also of olfactory experiences in the past. Learning about smell should be part of our general education and I belief scent experts and museum professionals can learn a lot from each other”

All in all this is a strong case for multi-disciplinary collaborations in museums that want to preserve and analyse artefacts with an olfactory dimension.

If you want to read more about the Collector’s Cabinet please consult:

Caro Verbeek is a scent curator and sensory museologist. As a historian she uses the senses as methodological tools. Previously she worked at the Rijksmuseum as a curator of prints and drawings for 6 years.