This post by Caro Verbeek originally appeared on Futurist Scents

In 2015 I embarked on one of the greatest adventures of my life. IFF (Hilversum), the Rijksmuseum (Amsterdam) and I (Vrije Universiteit Amsterdam) reconstructed a dozen historical and other scents for our joint project ‘In Search of Lost Scents’. All scents were related to art works from the so called ‘Highlight tour’: a unique project combining the best of (very different) worlds.

Right before the lockdown (due to corona) I was able to introduce some of these scents to a group of blind and near sighted people during a tour at the Rijksmuseum, organized by Hannes Wallrafen of Stichting Geluid in Zicht and Cathelijne Denekamp. Denekamp is manager of accessibility in the museum and is convinced the senses can play an important role in inclusivity:

We started our multi-sensory tour in the dimly lit vaulted rooms that store medieval and renaissance art works. We halted at the painting ‘Adoration of the Magi’ by Geertgen tot Sint Jans. The artist confronts us with lavishly dressed men holding precious gifts in front of a new-born child sitting on the lap of his mother. After this description the participants recognized the biblical story of the three kings offering frankincense, myrrh and gold to Jesus without even hearing the title of the painting. Not mentioning such details leaves more room for the mind to explore and imagine.

Frankincense and myrrh were meant as burnt offerings to pay honour to kings and gods. In antiquity  resins were burnt ‘per fumum’ (through smoke) to make its fragrant emanations reach the nostrils of divine beings. Every contemporary viewer of this painting would have understood that by offering these fragrances these royals symbolically acknowledged the divine and profane superiority of Christ; a meaning that got lost somewhere over the past centuries. And so did the meaning and aromatic quality of one of the scents.

The participants were enabled to actually smell myrrh as part of a story-telling technique. Its aromatic quality (bitter) is connected to its historical meaning: besides being an offering to a god, the bitterness of this resin was considered prophetic and referred to the future suffering of Christ. This means that sensory engagement can actually lead to a better understanding of past rituals. Here’s what participant Emilie De Lanoy Meijer recalled months later:

“Because of the scent of myrrh I instantly felt transported to the story and time it took place.”

Scents are in fact known to elicit intense historical sensations, according to neuro-scientist Richard Stevenson; even more so than images or sounds.

“As a fully blind individual I do not feel any connection to paintings, but rather to stories”

We then took a small detour to a so-called ‘pomander’ in the department of the ‘special collections’. Pomanders are metal jewels filled with fragrances, worn by people of high status such as doctors and lawyers. They were hung from a chain or ‘chatelaine’ so the scents could be taken to the nose at will. Fragrances were supposed to help protect people from diseases, which were thought to be caused by bad smells (think of ‘malaria’ which literally means ‘bad air’). Baring in mind the story surrounding the three magi: a pomander could also function as a prayer nut which contents were an offering or wordless prayer in itself.

On Wednesday 16 September 2020 (8-10pm), Inger Leemans will give a lecture, Privy histories / Secrete(n) geschiedenis. Fighting stink in the ‘Golden Age’ as part of the Odorama ‘Law and Odor’ series at Mediamatic Amsterdam.

In her lecture Inger Leemans will discuss the malodours of the ‘Golden Age’. What were the olfactory challenges facing early modern cities such as Antwerp and Amsterdam? How did they try to cope with stench? Diving into the old archives and walking through the Antwerp sewers, cultural historian Inger Leemans digs up old dirt. Scent designer Frank Bloem – The Sniffaroo – will freshen up the presentation with malodours and fragrant cures. 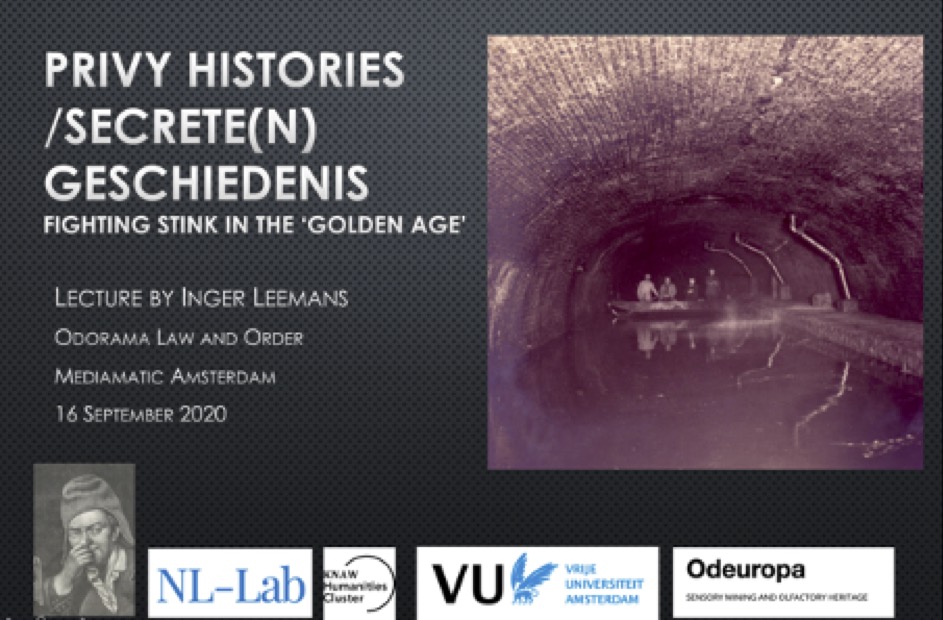 An upcoming workshop on “Smell and Stereotype in 18th- and 19th-Century Visual Culture” is seeking submissions. The workshop is part of the Association for Art History Annual Conference in Birmingham, U.K. 14-17 April 2021.

In the 18th and 19th centuries, the ‘olfactory revolution’ that reoriented conceptions of smell led to renewed meanings and functions of this sense in social life. The epistemological shift that strongly linked olfaction with the nervous system, the development of hygiene as a science, and the flourishing of the perfume industry contributed to transforming the significance of smell. The act of smelling thus became involved in many identity constructions such as nation, race, gender and class. Olfaction came to be gendered; for instance, as specific smells became associated with women, the act of smelling was seen as pertaining to the feminine by means of objects such as scent bottles that performed women’s supposed extra-sensitivity to smells, and perfume was increasingly used to bolster the association between women and flowers. At the level of nations, the high proportion of Italian and French perfumers in England contributed to the construction of national stereotypes.

This session seeks to examine ways in which visual culture expressed and reinforced the role of the sense of smell in the construction of stereotypes. Graphic satire, for example, abundantly challenged the invisibility of smell, often representing stench and fragrance in order to express political criticism, reinforce social hierarchies or identify censorious behaviour. Caricaturists, such as Gillray, Boilly and Daumier greatly contributed to stereotyping in allegories, expressions of disgust provoked by miasmas, and representations of effeminate characters such as fops, macaronis, muscadins and dandies. By examining these and other issues related to the representation of smell in the creation and circulation of stereotypes, this session seeks to provide a cross-disciplinary contribution to both the history of visual culture and the history of the senses.