After more than nine months of remote working due to the pandemic, we finally brought part of the Odeuropa team together. This October, 11 Odeuropa team members, representing all work packages and almost every project partner, met in Paris to smell things, co-create annotated data, bridge gaps between core concepts, and even challenge each other to a game of foosball. This lockdown period has been a burden for all research teams, but for a project researching smells and olfactory heritage, the audiovisual-biased world of online working has been a severe challenge.

We approached this first in-person gathering ‘nose-first’ with the help of our PhD student, Victoria-Anne Michel who organized an olfactory workshop and smell walk for the team. During the workshop, we were able to smell perfumes and raw materials which we then categorized and made associations with through our sense of touch. During our smell walk through the different spaces within the Bibliothèque Nationale de France (site Richelieu) we stuck our noses into a few books, old and new. While walking around the place, we first inhaled the general atmosphere, which sensory researcher Kate McLean calls “smell catching.” We then went “smell hunting” in specific spots. Through this exercise, we felt the contrasts of olfactory atmospheres, or “smellscapes”; from the sleek and modern Performing Arts reading room, the wax wooden rotunda, the futuristic corridor leading to the old-fashioned Manuscripts reading room, and, finally, the impressive, bright, cathedral-looking Labrouste reading room. The discussions that followed were a mix of poetic impressions, technical considerations like the different types of air control systems, and personal scent memories. With this, olfaction functions as both an emotional and spatial sense! Special thanks to the curators Sylvie Bourel, Hervé Grosdoit-Artur and Mathieu Lescuyer, without whom this smellwalk would not have been possible.

This trip not only allowed us to get to know each other and train our noses, but also to truly invest in interdisciplinary knowledge exchanges within Odeuropa and beyond. Throughout the few days, we were able to  meet with researchers, heritage groups and other parties involved in the perfume and scent culture industry.

Some highlights from our trip:

Alas, three days was surely not enough for all our ambitions – so much is going on in the realm of olfactory heritage in France. So: we’ll be back! 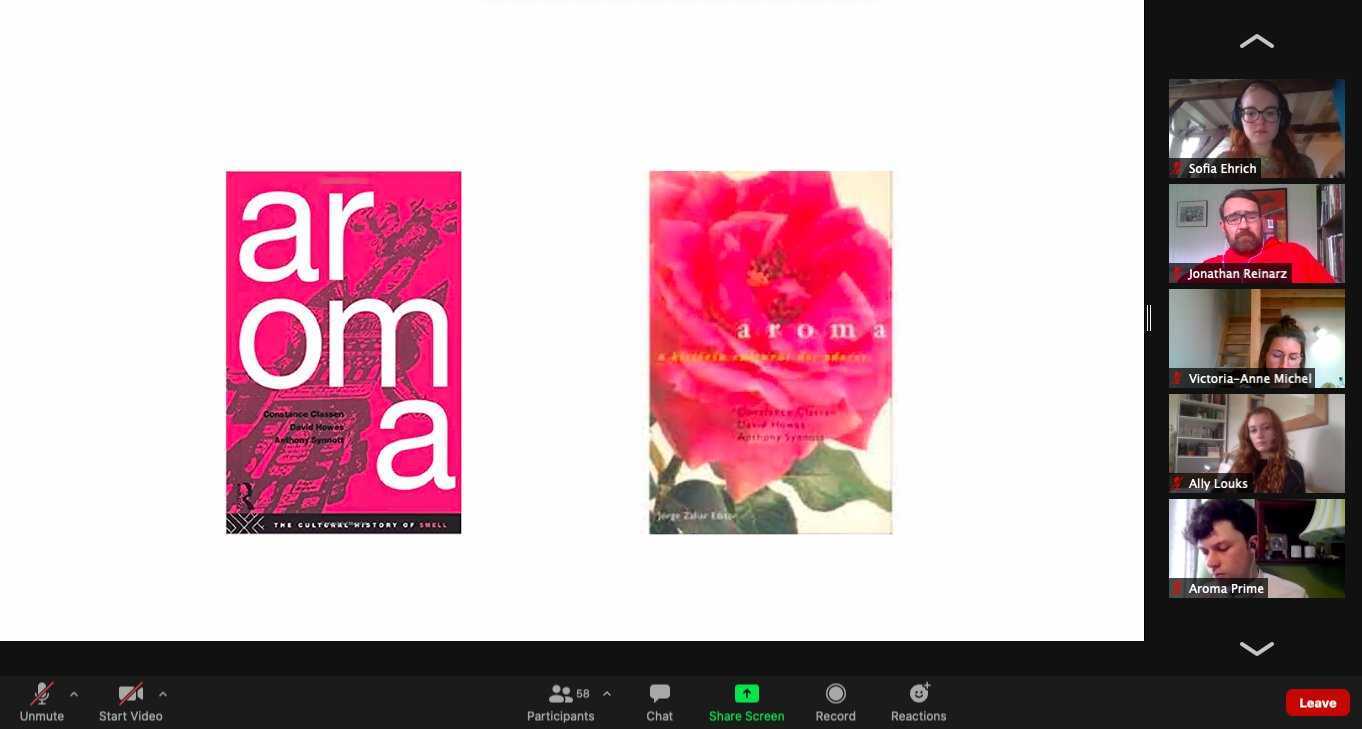 On May 26, the Odeuropa project opened its new “Smellinar” series with a lecture by David Howes. With the Smellinars series, Odeuropa aims to provide a podium for the exciting, innovative, and multi-disciplinary work that is going on in the world of olfactory heritage and sensory mining. Smell historian William Tullett is the host of the Smellinar series.

Anthropologist David Howes is one of the pioneers in the field of sensory studies, and the co-founder of the Centre for Sensory Studies at Concordia University. With this centre, Howes and sensory historian Constance Classen have created an open, yet robust space for exploratory and fundamental research into the cultural history of the senses.

As professor Howes is now working on a Sensory Studies Manifesto (forthcoming from the University of Toronto Press), the Odeuropa project was eager to hear his thoughts about the agenda for the field. In his lecture, Howes expressed his excitement about the turning point he envisions the field is now experiencing. According to Howes, the Odeuropa project is a sign of a “revolutionary new opening” in the field. “This shows we are on the cusp of a new era in smell studies”, Howes stated. He drew a parallel with Aroma: The Cultural History of Smell (1994), the groundbreaking work exploring the history, anthropology and sociology of olfaction. This book, which he co-authored with Classen and the sociologist Anthony Synnott, appeared at a moment in time where the tide was turning for the interest in olfaction. Just as the announcement of the launch of the Odeuropa project has attracted widespread interest across the humanities (including digital humanities) and social sciences, and from the global press, in the 1990’s, Classen and Howes were overwhelmed by the attention and response their work triggered. Their book was awarded, reviewed, discussed, critiqued and translated, while they themselves were welcomed all over the world to research smell cultures, and even became the object of research themselves, for (as Howes narrated) people in Brazil and Papua New Guinea ‘sniffed them out’. Thus, the smell researchers also became subjects of olfactory analysis.

Their first forays in the world of sensory research already convinced Howes and Classen that in order to learn about the senses, one has to embrace embodied learning techniques. “Follow your nose”, was Howes’ advice to the audience. Although this might seem self-evident, in academic research this is still one of the main challenges. Howes discussed the seminal article by sensory historian Mark Jenner in the American Historical Review ‘Follow Your Nose? Smell, Smelling, and Their Histories’ as an example of how the sensory turn might have put the cultural history of smell on the agenda, but scholars also remained ‘nose averse’ – critical about the nose as an instrument of knowledge and about olfactory recreations of historical scents. Howes says he would delete the question mark from Jenner’s title.

Connected to this debate is the question about whether the Western world really experienced an ‘olfactory decline’ in the 19th-and 20th century. According to Howes, contemporary critical attitudes towards ‘kwowing by sensing’ are a result of a discrediting of the lower senses. This has its origin in a variety of developments, such as the transition from humoral and miasma theory to the germ theory of disease, and the impact of philosophers like Kant (who disqualified the fleeting, transitory sense of smell and banned it from his aesthetics), Freud (who had a “nasal complex,” according to Howes, and discredited olfaction as animalistic), and Proust (who tied smell firmly to memory and the emotions, and therefore pushed smell in the domain of the irrational). Although Howes underlined the rhetorical power of the Proustian statement that smells are “gateways into the past”, he warned against a simple connection between smell and emotion, reducing the sense of smell as an irrational instrument of hedonic appraisal.

Howes presented numerous examples of the wide array of uses that smell had in previous eras. Smell was regarded as a spiritual power (e.g. in Christianity, due to its association with the breath or spiritus, it was believed that Christ would ‘smell’ out those souls who should go to heaven and those that should go to hell on Judgement Day). In Sandalwood and carrion : smell in premodern Indian religion and culture, James McHugh describes how smell can also function as a spatial sense, a mode of orientation.

Howes concluded his lecture with some advice for olfactory explorers:

The discussion that followed amongst the Smellinar participants was lively. Jonathan Reinharz, another pioneer in sensory studies and author of Past Scents: Historical Perspectives on Smell, underlined that the revision of smell as an instrument of cognition also closely connects to the way emotion studies have reconceptualized emotions from animalist, irrational impulses, to modes of appraisal and cognition. Asifa Majid, expert in olfactory language and cognition, discussed with Howes the ambiguous role of neuroscience and psychology, which have furthered knowledge about smell (Majid favorably mentioned a recent article by Rekow et al. which describes how the sense of smell plays a key role in initiating complex visual categorizations in the infant brain), but also may have hindered more anthropological and cultural historical approaches by prioritizing the laboratory as the primary context for investigation. Odeuropa project lead Inger Leemans and Howes discussed how experimental and multi-disciplinary research teams, like the Sensory Studies Center in Canada, can create a safe environment for scientific exploration and innovation. The center works with the concept of ‘research creation’ (so as to valorize non-academic or artistic research development) and is now preparing a page on its website dedicated to the junior sensory explorers – that is, the Next Generation Sensory Studies Scholars and Artists. Michelle Krell Kydd (educates on smell through “Smell & Tell” workshops, at the University of Michigan) discussed whether Covid is not only resulting in more interest about olfaction, but also in more anxieties and new prejudices against smell.

Paola Totaro announced that she is publishing a new book on how the Covid pandemic is changing attitudes to smell. The work of sensory ethnographers such as Anna Harris was mentioned, which analyses physical examination by doctors (a sensing of the body, through the body) and other ways of embodied learning like knitting. The discussion concluded with stating the importance of sensory literacy, the ability to orchestrate and employ the senses in our digital age.